The GAP Gaffe or “Research Much?” 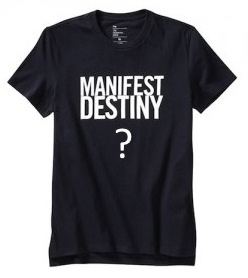 nifest Destiny” emblazoned across it. Now, the urban contemporary clothing chain may have thought that “manifest destiny” was a cool way of saying “make your own future”, or “determine your own fate”, but shouldn’t have someone done a search on this phrase? Didn’t it ring a bell for anyone?!

According to Encyclopedia Britannica on-line, “Manifest Destiny, in U.S. history, refers to the supposed inevitability of the continued territorial expansion of U.S. boundaries westward to the Pacific, and even beyond. The idea of “Manifest Destiny” was often used by American expansionists to justify U.S. annexation of Texas, Oregon, New Mexico, and California and later U.S. involvement in Alaska, Hawaii, and the Philippines.”

In short, manifest destiny was the early United States’ justification for expansion across North America, which included the systematic destruction of many Native Americans and Mexicans who were unlucky enough to be living on land that the U.S. government deemed to be their divine right. Now, this is not U.S. bashing. Many countries have dirty histories around expansion or in dealing with indigenous people. But most of us aren’t touting those dark times in history on a T-shirt.

How could a huge company like the GAP just print a zillion T-shirts with this “catchy” phrase “Manifest Destiny” without so much as doing a Google search about it? We don’t even have to leave our desks, our offices or our homes to research such things anymore. This kind of GAP, oops, I mean gaffe, could easily be averted by a click of a mouse.

So now the (justifiable) outcries have begun. This is hitting the media including stories on Salon.com, BusinessInsider.com, blogs and through the Native American community — several stories and comments have been posted at www.indiancountrytodaymedianetwork.com. A Change.org petition has been struck asking the GAP to take the shirt out of their inventory.

Once this gaffe hit the media the GAP was quiet at first, but once the story started to go viral, (particularly the Salon.com story), the GAP sent an email statement that read, “Saw your story and wanted to let you know that the “Manifest Destiny” t-shirt by Mark McNairy, offered through the GQ partnership, will no longer be sold in Gap stores or online.  We value all customer feedback, and wish to emphasize that our intention was not to offend anyone.”

T-shirt removal and weak apologies are not enough. This was obviously a bad idea from the start that the GAP did nothing to protect itself from. All of us have an obligation to research the words that we decide to put into the world. And this research isn’t rocket science. Here’s a simple checklist for the GAP and others who don’t do their due diligence:

You’re only as good as your reputation — all of us, individuals, companies and governments. If you care about your reputation (and your customers), do the research to make sure you don’t jeopardize your brand with a stupid, insensitive mistake.

And GAP – revise your idea of corporate responsibility and properly apologize to America’s indigenous people… fast. That’s your destiny.

Sign up for the weekly “Truth Tuesdays” blog or for a daily dose of truth, click here:

About the Author: maureen

Sign up for Monthly MOtivations: Best of the Blog. Your address is safe and secure and we never spam!

Looking for something in particular?