An Idea Is A Terrible Thing To Waste 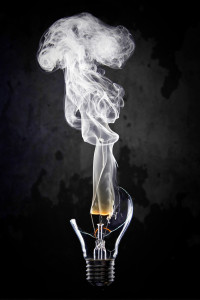 Almost every time I lead a collaborative strategic planning workshop, I experience how human behaviour can both help and hurt the collaboration process. This time it was around brainstorming and idea generation.

Ideas are meant to be building blocks that lead to better concepts and executable strategies. Knocking down an idea because it doesn’t arrive as a fully-formed proposal, strategy or action will only lead to fewer ideas being offered, which can lead to stagnant thinking and missed opportunities.

However, often the faster the ideas flow, the more the group wants to shoot down the ones that aren’t absolutely perfect That’s where good facilitation and leadership come in. All ideas deserve their 15-seconds of fame, or at least enough time to make it onto the brainstorming board. From there your group can determine if the idea has merit in its current form, if it would be better applied a little differently, or if it’s just not practical in any incarnation.

Here’s an example. An association I recently worked with had a goal of increasing their membership and membership engagement. One board member had an idea to include member event fees (such as lunches and networking events) into the annual membership fee. Another board member chimed in that the idea was too expensive and the increased membership fee would become a barrier to members. The idea fell to the ground.

There was merit in the idea, just not in its initial form. I asked the group to reconsider the idea to see if it would be beneficial to include one “special” member event each year in their membership fee. The group agreed that including the cost of one event in the annual membership fees wouldn’t make things cost prohibitive, but instead could enhance the value of membership.

Next time you’re part of a brainstorming or idea creation session, allow each idea that’s offered live long enough to run it through these questions. Because ideas — even the imperfect ones — are a terrible thing to waste.

About the Author: maureen

Sign up for Monthly MOtivations: Best of the Blog. Your address is safe and secure and we never spam!

Looking for something in particular?